We had a few days in the low 30s but now we are back to negative teens for lows overnight.  I think the high yesterday was 1 degree.  And windy so the windchill is super low.  But it will gradually warm up over the next few days into the upper 20s and low 30s.  This morning seems to be the worst of it – so far.

Obedience and agility classes have been going well.  Have only been bringing the dogs that I can bring inside since it’s been so cold out and I don’t think I can run my van and lock it.

The herding club obedience and rally trial went really well.  Another perfect Q weekend for Narc – the girls too this time.  Narc earned 2 more Rally Advanced Qs with placements and finished his RA title.  He scared the judge on Saturday by running over to him like he was going to grab or lick his hand.  I’m not sure if he made contact or not but it was not a nice thing to do.  He had moments of brilliance but he also paces when he is stresses and Advanced is off leash so it takes a bit to get him back and focused.  I think it will be a bit til we attempt Excellent.  There are lots of new signs/exercises for him to learn too.  Letty earned her first 2 Advanced Qs both with placements.  Sunday she even took 1st place!  She thinks rally heeling is stupid but she enjoys the change of position signs.  Sunday she walked in the ring and looked at the judge and barked once at him.  So I worked hard to keep her attention on me as I didn’t want her going over and barking at him by him.  That was reflected in our nice score.  LOL  I think both dogs think I talk too much in rally – since I can.  Going back to training more heeling will be good for both of them.  And heeling more different places.  Vada was the rockstar this weeekend!  She earned 2 Rally Excellent Qs with 1st place on both of them.  And she picked up 2 CDX legs with both of them being 2nd place!  We had a few bobbles in the ring and her drop on recall drop was a bit close to me but she did her broad jump and she did her sit stay and she did drop!  1 more and we can focus on utility!  I entered a trial in the middle of March at TCOTC.  Just on Saturday.  Open A and Excellent Rally for Vada to hopefully finish up both titles.  And Advanced Rally for Letty to hopefully finish her title too.  They are offering high scoring FSS rally dog too.  Pretty neat. 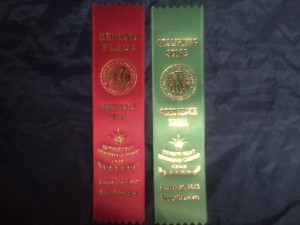 Letty and I during the rally awards presentation.

The March CPE trial opened on Tuesday.  It’s close to full on Saturday but it hasn’t been super crazy like the OTR trials have been.  It’s been nice and refreshing.  Almost makes me want to find a date for a 2nd trial in Isanti.  I love the dirt there.

Missed obedience class at Total Recall on Wednesday since I had to stay at work late and then dial in from home later.  But I got a lot of paperwork stuff done while at home.  It was going to be Seven’s first night back in obedience class.  Next week we’ll miss as Sonic needs to go see Dr Heather as he’s started refusing the aframe in class and he was lame a week or two ago.  He seems a bit roachy and he’s not really holding his head up.  I’m bringing Letty in for a check up too so we can make sure her rib is staying in place.  It’s a good reminder for her on how awesome Dr Heather is too and that she should like her to put her hands on her.  🙂  Then the following Wednesday is Vada’s appointment with Dr Julia so we will miss class again.  Hopefully he can go the week after!

Tonight we are training in the barn in Hudson again.  It’s going to be a COLD one!  But it’s so nice to just work drills with the dogs.  Especially for Narc so he can practice weaving more than 6 poles and at speed.