Judging by the weather, it does not feel like we are at the end of February. It does not feel like it will be March on Saturday. To me, March is spring. When I left for work this morning it was -10. I think the high today is supposed to be 0. And we have a lot of snow and it’s frozen to the streets and has turned to ice on top. It snowed a week ago and has not warmed up enough for the plows to really clean the roads down to the pavement.

Karl and I went to the TCOTC Awards banquet at the end of January. It was our first time going. We had a great time and the food was good. My dogs had a great year and earned several awards.

I finally got Narc in to see Dr Choi at the U of M for his continued weight loss even with being fed a huge amount of food and losing hair on his legs and feet. I wasn’t sure what to expect and was a bit nervous. It was hard being in the waiting area at first too since the last time I was there was for Copper’s radiation treatments. It just made me miss him. Narc was a good boy. Dr Choi asked a lot of questions about him and observed him. She was in a bit of a quandary on how to treat him since his tongue and pulse did not match. So she suggested that we start cooking his meat as his body is not able to digest the raw and to add sesame seeds to his diet. No pork for him. We came back 1 week later for a check up and to have an acupuncture session done. In 1 week had had gained 3 pounds! She gave me information for seaweed to add to his food and she did acupuncture and said to come back if he starts losing weight again. He was a bit fidgety but was good enough for the acupuncture needles to mostly stay in. So far he is still doing well and Karl has reduced his food amount as he was getting pudgy. We got some vitamin mix to add to his food to give him the calcium that he needs since he gets no bone in his diet with it being cooked. He was drinking a lot of water over the weekend and peeing a lot so Karl quit putting the supplement in. He will add it back slowly.

Vada had a tune up with Dr Heather and was out of adjustment quite a bit. Her lower back/pelvis area was out pretty bad and I don’t think we ever got it back to normal as she was still fidgety. Vada was supposed to see Dr Julia last Thursday but we had warm weather and a crazy snow storm and even though I parked at the end of the driveway, after taking a long time to get home, I got stuck backing out and wasn’t able to go. Poor Karl spent hours digging the van out. Again. So we rescheduled her appointment for tonight. I’m curious to see how she’s doing. She did well with bars over the weekend for the CPE trial but she was grunting on landing over the jumps so I think she was jumping with her front end and not using her rear like she should be. Tomorrow she is due for her Adaquan shot too so Dr Julia will see her at her “worst.” Sadly, I have gotten bad about doing her exercises and I know they make a huge difference on keeping her in shape. They don’t get out to run either since the snow is so deep and there is nowhere to walk them regularly. For some good news though, she is totally off of pred right now and she seems to be staying itch-free.

We attended a mini seminar at TCOTC on Chinese Traditional Medicine by Dr Jami Whiting. I really enjoyed it and learned a lot. It was a few days after Narc’s appointment with Dr Choi so it helped fill in some information for me. She did a great job presenting. They might have her back to talk about chiropractic. I hope they do. I’d like to take Vada to see her about her allergies one of these days. Trying to spread out the costs of sick dogs though. Prozac is still having issues with drinking too much and peeing in the house. Her liver values were off the last 2 times shew as checked. Her thyroid was low also but then too high when we retested after being on meds for awhile.

The first weekend in February I took Vada, Letty and Seven to 1 day of the MMBC UKC rally trial at Tails Up. Vada finished her UROC (United Rally Obedience Champion) and earned 2 more legs towards her URLX (United Rally Excellent) for a total of 6 legs of the 10. The next title would be the Grand Champion but it takes 15 QQs (RO2 & RO3) with a combined score of 196 I think. So only 4 points off total. Vada can do it but it’s a lot of showing. 🙂 She earned HIT for both trials and High Scoring MMBC member. I entered Letty in both RO3 runs. She had weird NQ problems in each run so no title for her. However, Seven finished his URO1 and earned a bonus leg. His first obedience title ever! He actually showed me some good heeling too. Such a good boy! 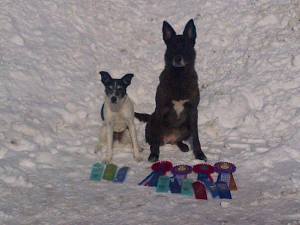 Seven finished his URO1 and then earned a bonus leg with 3rd place
Vada finished her UROC with 3 firsts and a second, 2 HIT and 2 High Scoring MMBC Member

That Sunday I took the dogs to a USDAA trial at On the Run. Vada, Letty and Narc (P2) all Qd in Snooker but no SuperQs. And I think Narc Qd in P1 Jumpers finally too. That night Letty finally came into season. Which meant that I had to scramble for the AKC trials the next few weekends.

I ended up having Vada, Seven and Narc entered in 2 AKC trials both days each weekend. Out of all of those runs Seven earned 1 AXJ Q and Vada earned 1 (or maybe 2) Masters Standard Qs. Lots of close runs but that doesn’t count. It was weird not having Letty there.

I signed up for 2 more obedience classes at TCOTC on Wednesdays – Advanced Skillwork and Competition Obedience. Letty did so well in her class that I figured I could put her in a higher class that matched her skills better. So I moved her to the Competition Obedience class on Monday and then I put Seven into her Skillwork class. I moved Vada to the Competition Obedience class on Wednesdays and put Narc in the Advanced Skillwork class before hers. Vada got to go twice a week while Letty was in season and then we didn’t have class due to a volunteer appreciation night so she hasn’t been back yet. But the other dogs are doing well. They have things to work on but also have some skills. Narc has learned what the clicker means. They are all happy to have an hour of my undivided time to learn new things. That is the main point of the classes.

For Valentine’s Day we went to Manscetti’s and ordered a heart shaped pizza. The deal came with wine for Karl. I had my usual soda. Super good pizza. He got me a cute card and some spring candy and some beautiful bright yellow flowers.

I saw a new rhuematologist last week. I love him! He listens and he teaches and he’s up on current things and he questioned what I questioned about my old doc. I’m so glad I got a referral and gave him a try.

Last weekend was my last OTR CPE trial as trial secretary for the season! MMBC next and then I get a break for the summer. The dogs ran a lot and they ran well. It was Letty’s first trial back since coming into season. She went to class once so had maybe 3 runs to prep. She had trouble with her weaves on the first course but we fixed them and she was good the rest of the weekend. She had a 100% Q rate Friday and Saturday and her first run on Sunday. Then things started falling apart. I was getting more and more sick too so I’m sure I wasn’t very helpful. She was running great though. Vada had a 51 point Snooker run on Sunday! Lots and lots of great runs. I think she only had 2 NQs from missing her dogwalk contact in 2 of the Standard runs. Seven ran well and nailed all of his weaves. I only entered him in classes where you need 6 weaves or none or they don’t matter. He ran great! His only NQ was a jump I tried to wrap and he did a 180. An issue that I know he has. Narc was super happy and ran well too. He was Q-less until Sunday when he earned 3 Qs I think. Just little things though. Nothing crazy. Some runs with him were awesome big dog runs. However, this judge has lots of straight lines in her courses and off the start line. It made me miss my start lines and I was painfully aware that I have lost my stays with all of the dogs. And only Seven has a stopped contact. Even my baby dog has no contacts or start line. Bad trainer! It makes me think more about doing less agility and more IPO training. Tough since that means the focus is less on the other dogs. And hard to think of when we have many feet of snow and can’t train outside. But that is also why I feel I can’t train agility like I should be doing. I miss real training. Agility class is not training.

This weekend Vada, Letty and Narc (just Sat) are doing AKC agility at TCOTC. It’s nice to be somewhere different. And there is lots of crating space there. I am also working. A LOT. Should have my worker time in for end of year awards no problem. We’ll see how the girls do this weekend. Vada is qualified for the Invitational. I think it’s too lofty of a goal to get Letty also qualified by the end of June. So I might just give up that goal and move on to something else. Like focusing on her BH and getting her ready for IPO1 by October.

Also, we lost Eeyore in February. He was 13 years old. The vet thinks that his joints were just too painful and arthritic so he would not get back up. Karl took very good care of him and tried to get him feeling better. He even brought him into the garage and heated the garage for him. Luckily he was able to drive him to the vet in Buffalo to euthanize him humanely and have him cremated. The vet was very helpful all winter with Eeyore. 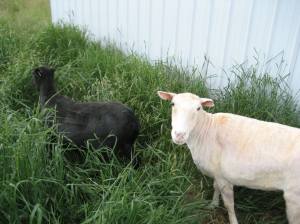