2 weeks ago Vada saw Dr Julia for her bicep issue as she was still lame in her front left.  She ended up doing HA injections into her left shoulder and 2 knuckles – 1 on one foot and 2 on the other.  She was still restricted for a week on activities.  Last week I took her to Utility class on Wednesday and she was so happy to be working again.  She’s been staying sound.  So 1 more week of obedience only this week.  Then next week we can start doing some sprints.  We have an appointment with Dr Julia next week too so she’ll be able to check on her progress.

I’ve started taking Narc to the group obedience class on Wednesday. He’s a good fit in that class.  And we’ve started working on his stand for exam by having people walk by him and give him treats.  Then I can work Letty for a bit afterwards and then work Vada in the Utility class.  It works out great since I get 3 dogs worked in 1 trip.

Last Saturday Karl and I went to my Uncle Bruce’s house to help with the tasks to get it ready to go on the market.  We mostly helped out in the garage with sorting things and loading “junk” in to a truck.  Most of it was really not junk but it was getting tossed in the interest of getting things cleared out so the house could be sold faster.  Bruce has a pretty aggressive cancer but they have determined what it is and he is doing chemo and radiation.  Hopefully he kicks cancer’s butt and goes into remission and gets some relief from his pain and exhaustion.  Kind of makes you think about the state of your own possessions.  People who don’t really know you don’t know what is important and what is not.  Seems like it might be a good idea to get possessions down to just those things that are important so there would be less clutter for others to sort through.  It was  sad reason to be there but most of my Mom’s family was there to help out.  It was a great show of support.  My brother and sister and brother-in-law showed up too.

That was also Valentine’s Day.  Which we started by getting locked out of my running van AND the house!  We had to break into the house to get another set of van keys.  My tomboy days paid off!  And I learned the very important lesson that the dealership forgot to teach me – when the remote starter times out after 20 minutes then the van locks itself again.  With your keys in the van unless you have put the van in gear which turns off the remote starter session.  Karl got me some beautiful flowers.  And they are potted so they will live longer.  I’m not sure what kind they are.  But they are purple and white striped. 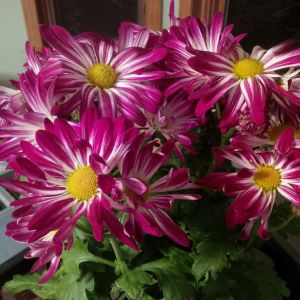 I had picked up a small rose plant too to replace the rose plant that Asheley gave me that the cats are.  Both plants are now on my desk at work where there are no cats.  I also got some yummy turtles.  We had dinner at Jimbo’s on the way home from Bruce’s.  We figured it wouldn’t be too busy there.  And it’s always good food.

I had picked up a cake from DQ also.

Sunday we actually had IPO training.  There were 2 other folks there.  The other 2 wimped out since it was “too cold” out.  Training got canceled yesterday too since it was “too cold” out.  I love having the remote starter!  Anyways, I had really good sessions!  Letty’s obedience was good and her retrieve with the big dumbbell on the flat was really good.  In protection I had great focus and obedience!  We worked on some things that I picked up from the seminar too.  And we worked on having Letty carry the sleeve.  Mostly it’s me remembering to get up there to get the leash to get her moving as Warren is slipping the sleeve so she can’t drop it to the ground and change her grip.  I need to clean that up if I’m going to be able to work her on other helpers without them freaking out that she might damage their sleeve.  I circled with her and had her down.  It was a great session!  I worked Vada on some obedience too.  Signals and send outs since I didn’t have her article bag / gloves.

This last weekend was the last OTR CPE trial of the season.  As usual, there were lots of last minute pulls so lots of monkeying around with the wait list.  But I got a lot of folks in that still wanted to play.

I ended up adding a few runs for Letty too.  I figured that I can work her contacts in any run.  It’s mostly retraining myself to pause.  She went 5/10 and picked up another Level 5 Standard Q so she only needs 1 more for her C-ATCH.  She does not understand stopping on the teeter or aframe but I got 2/2 on stopped dogwalks.  And they were at the end of the course so I could release, do the tire/jump and reward.  She also did a set of 12 weaves on the right.

Fringe and I had awesome runs or clusters.  Lots of off course possibilities and weird lines this weekend.  Not my kind of courses.  But she went 6/10 and finished her CL3-S.  She only needs a Standard Q and a Colors Q to be out of Level 3.
Seven was a weaving fool this weekend!  He went 6/8.  The Jackpot gamble was impossible so we’ll write that one off for all of the dogs.  Seven finished Extraordinaire Snooker (ExSN) title too – 30 Level C Snooker Qs!  No one seems to care but it’s a huge accomplishment I think.  I am putting him back in Level 5 once he earns that title so he can work on the Champion titles.

Narc had a rough weekend.  I really struggled with my handling with him.  He was often like WTF? or biting me in frustration.  So he only went 3/7.  Sunday he had a gorgeous Standard run going but then he entered the dog walk at an angle and lost his footing and fell off.  He landed flat on his side.  He sat up but didn’t stand.  I was so scared he hurt his back bad.  But after what seemed like forever he stood up.  Everyone cheered as he walked off the floor.  A vet there listened to his lungs and felt him all over and checked his spine and neck and everything looked good.  I gave him some pain meds and pulled him from the only other run he was entered in for the day.  Typical Narc – he got over the shock of getting the wind knocked out of himself and then he’s like “OK what is next?”  He just accepts things and moves on.

I picked up some Girl Scout cookies for Karl too.  🙂

Should be a quiet week.  It is super cold right now.  I’m so ready for spring.  So are the dogs.  We miss being able to move about freely outside.  This coming weekend is USDAA.  Karl is running Fringe on Saturday!