This was written Nov 20th but not published for some reason.

On October 19th we celebrated our 8th anniversary.  We intended to check out a new to us restaurant in Elk River but, as our life seems to go, we had to change our plans.  So Karl brought home take out from Northwood and we ate dinner outside on our new to us picnic table.  Not what we intended but still a nice night.  Karl brought home beautiful roses.  I did not have a gift for him ready but had orded a bronze guitar pick that was engraved on both sides.  One side said “I PICK YOU” and the other side said “8”.  It turned out nice.

After the IPO trial I had Dr Heather see Letty before the agility trial to make sure nothing was out from protection.  Sure enough she was kind of a mess.  So it was good that I got her in.

We played AKC agility on Friday and Saturday.  I have no idea who did what.  I think Vada Qd in JWW one of the days.  I think Letty had weave issues in all of her runs.  And I think Fringe did well.  Guess I should look it up somewhere.

Saturday after the trial I drove to WI with Vada.  We had to be up bright and early and I did not want to get up at 2am to do the drive so I stayed at a hotel near the park where the tracking test was held at.  It was a mixed test with some TDs (hence the earlier start time) and TDXs.  I drew TDX track #2.  We started out awesome.  It was tall grass.  We got past our first set of cross tracks.  And we found the first article.  Then we had to go through a line of trees.  She got through that.  Then we hit a few feet of tallish grass and then it went to smushed down mowed low leaf plants next to a plowed corn field.  She really struggled with the lower grass.  She was on it for a little bit but then lost the track.  She searched and searched for what seemed like forever until she finally gave up.  Similar to the weekend before, the track layer walked us through the rest of the track.  She had trouble on the part with the lower vegitation and dead things sticking up.  Once we got to greener grass she was back on the scent.  She tracked through the pine needles under the pine trees and found the last glove.  I think failing 2 weekends in a row really hurt her confidence.  Not sure if we’ll try doing another TDX or not.  There is a local one in the spring.  I have a new respect for those that do pass.  It’s not easy and anything goes.  I would never have laid a track where they did which shows my more limited IPO tracking thought process.  After the test wrapped up we went on a nice long hike in the beautiful park.  It was nice being able to spend time with Vada alone.

Monday I got Seven in to see Dr Jina as I felt a lump on his belly just past his rib cage.  It was a hard lump inside his body.  She did xrays and then aspirated it and sent it in to a pathologist.  It came back as scarcoma so she sent us to Blue Pearl for an ultrasound and to consult with an oncologist.  The ultrasound showed that the tumor was touching his liver and abdomen wall.  He had another tumor by his kidney.  His now spleenless cavity never healed correctly and had abnormal tissue in it and a bit of fluid maybe from the tumor.  They could not tell us much without doing surgery to remove the tumors to biopsy them.  She tried to asiprate the 2nd tumor but it was in too deep so she could not get to it.  So our options were surgery and chemo or do nothing.  He just had his spleen removed in June and his body was free of any visable cancer at that point.  They had even biopsied his liver.  So this cancer is very aggressive and his body was not even healing correctly from the last surgery.  After lots of agonozing thoughts and crying we both agreed that it would not be fair to him to do surgery and make the last of his time be more miserable.  It just felt like an impossible fight.  So now we are just spoiling him and making his last days as good as they can be.  He’s uncomfortable with the big tumor in his belly but he’s still eating and he’s enjoying getting out for walks and training (shaping sessions in the library).  We increased his CAS dosage and started him on Apocaps.  I don’t think he has much time left though.

Karl saw his knee doctor again.  He refered him to his partner who deals with more knees.  That 2nd doctor had an athletic person there to evaluate Karl’s knee.  They removed fluid from his knee and gave him another cortisone injection.  And he starts physical therapy next week.  Plus he has lost a lot of weight.  He misses agility so it’s nice that he finally has a doctor who listened to him.  And Fringe is already signed up for agility classes in January.  She will be happy to run with him again too.

We hosted another Tracy seminar over Halloween weekend.  Super fun as always.  The things I can do when she is guiding me are pretty amazing.  Letty had fun too.  I worked her 2 of the days.  Hopefully next year Karl will be able to work with her again finally.

Letty and I started agility classes again.  It was nice having the summer off.  Soon we will have to get back to obedience classes. Right now I am just not comfortable leaving Seven except when I have to.

Our annual photo shoot went super well.  Laurie got some great pics of Sonic.  And the group shot was pretty much drama free and turned out pretty good. 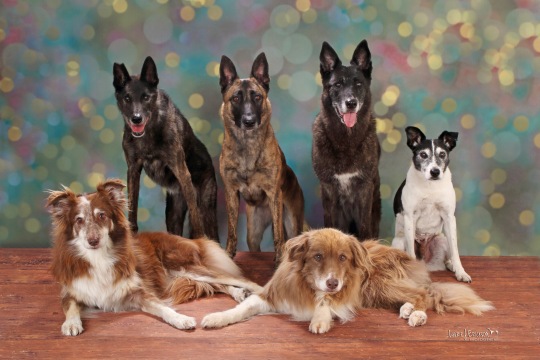 Karl had Dr Jina evaluate Sonic to see how much quality of life he had.  She agreed that it wasn’t very good.  So he setup an appointment to release Sonic from his body.  He hated the cart and wasn’t able to operate it very well.  He probably just didn’t have enough front end strength and he always wanted to turn to the left.  Even after laser he wasn’t able to pull himself up or stand very long.  He could only walk if we were supporting him.  And he would get so frustrated that he could not get up.  He was getting pressure sores on his hip too.  It’s really hard when their body fails so much before their mind does.  Karl misses him a lot.  He was a good dog.  I miss his bouncy barky self.

That weekend I had entered Vada in the MMBC UKC rally trial on Saturday.  I goofed up a sign in the first trial and lost us 3 points right off the bat!  But I got it together after that and we finished our UROG!!!  Then a bonus leg to make sure.  She earned a HIT on the first trial too.  2 firsts, a second and a 3rd.  Plus High Scoring MMBC Member.  I worked Letty in the warm up ring too and she did great.

Sunday I finally made it back to training at Warren’s.  Sandy was there.  Letty is not broken – at least not on Warren.  He was like “how can someone not drive this dog?” so that made me feel better.

I got moved to a new department at work and have a new boss and new procedures and standards to learn.

So much has changed in just a few weeks.  I was training a ton for the IPO trial before the trial and haven’t done much since.  We said goodbye to Sonic.  And we found out Seven’s cancer is back and aggressive and we will be losing him soon too.  Plus my new boss.  And Karl’s new schedule with taking the train.  This is not a favorite time of year for me.

We have been having great weather up until a few days ago.  I had to get Letty a new collar in blaze orange for when we go on walks.  I dug out an old one for Vada too.

I got Christmas cards ordered already and the letter paper.  I want to get a live Christmas tree for the house this year too.

CPE trial this weekend.  My 2nd as secretary for the season.  The first one went well 2 weeks ago.  Seven came with on Friday and Saturday and stayed home with Karl and Sonic on Sunday.  It was Narc’s first trial back and he did soooo good.  I moved him to Specialist so he jumped 16″.  I had moved Vada to Enthusiast too.  So neither is entered in Standard.  Fringe had a perfect weekend except for her Colors run.  Vada had an almost perfect weekend too.  Fringe and Letty had dream Jumpers runs on Saturday.  We were totally in the zone.  So much fun! 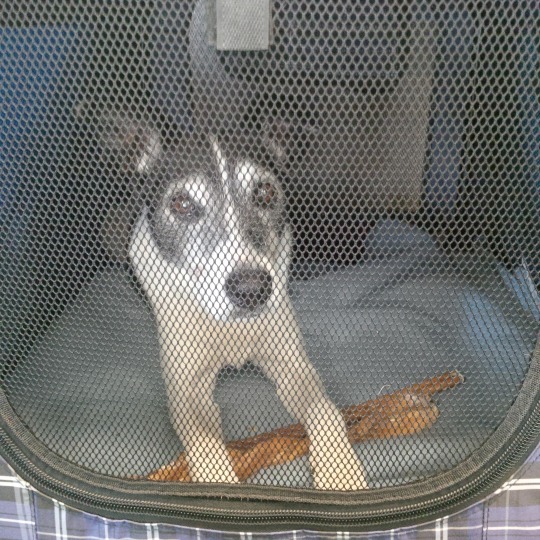